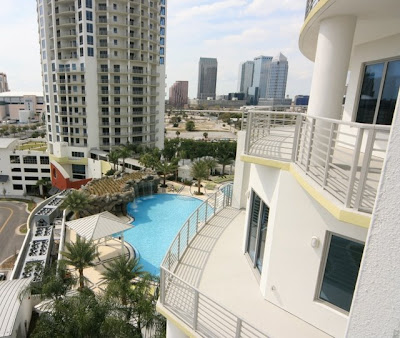 See all condos for sale! Towers of Channelside
I emailed my friend Michael at the Tampa Bay Business Journal to see if he had heard of anything regarding the bankruptcy. He says “It’s on the front page of our website today”! Ok, so I’m a Realtor, not a journalist, but I do try and get the scoop on the Tampa Real Estate Market!
Here’s the latest good news for The Towers of Channelside

It looks like at least one high-profile condominium project in the Channel District will have a fighting chance to weather the housing market bust.

The Towers of Channelside LLC emerged from Chapter 11 bankruptcy protection Wednesday evening with a new plan to pay back creditors over a five-year period and, its principals believe, the momentum to sell the remaining 150 units of its twin 29-story towers.  “We’re officially out,” said Richard Sacchi, one of the development partners for the project that was completed last year only to find that many of the potential buyers that placed deposits for units were not closing.
It was a problem afflicting a number of condominium projects across the Tampa Bay area, and eventually forced Towers of Channelside to reorganize and seek protection from its creditors last January when Wachovia Bank threatened to default on its $105.8 million loan used for construction.

That started a string of bankruptcy and foreclosure problems along Channelside Drive that included Key Developers Group LLC, which will auction off The Place at Channelside Oct. 15; Tampa Condo 2 LLC filing for Chapter 11 protection in March after failing to build its 51-story The Tampa Tower 2; and last May when Ventana Tampa LLC decided to give its 84-unit complex on Kennedy Boulevard and Channelside Drive back to the bank in lieu of $16.8 million still owed to Mercantile Bank.

But Towers of Channelside can now remove the bankruptcy clouds that have hovered over the project for the last 10 months, Sacchi, said.  “We were just better situated than these other projects, and we were driven to try and make it work,” he said. “The easier thing would’ve been to walk away, but we wanted to make it work and try and get everybody paid back. We’ll continue to stay involved and continue to sell units.”
When Towers of Channelside filed for bankruptcy protection, developers had sold 89 units, and had eight more that were just about ready to close. Even with the project in bankruptcy court, Sacchi said Towers of Channelside closed 16 units since March, and he believes those numbers could rise now that buyers don’t have to be concerned about what the bank will do about the money developers owe.

“It hasn’t been an issue to the people who have come in to buy units, but maybe being in Chapter 11 and the threat of foreclosure didn’t bring buyers to the property,” Sacchi said. “Now that they know we won’t be going to foreclosure, maybe some of those who shied away will come back.”

The biggest issue facing buyers right now is the lack of funding for home purchases – especially condominiums – coming from banks. Developers can’t control that, but a five-year window to repay its debts will at least give the market time to readjust, Sacchi said.  Buyers also could likely see prices on units drop at much as 15 percent from original pre-construction prices because of the reorganization, and drop that Sacchi said couldn’t come at a more perfect time with the housing market trying to rebound.
Last year, before the bankruptcy filing, Towers of Channelside earned more than $47.4 million in gross revenue from the sale of units, and had a net income of $5.9 million mostly from deposits and interest in escrow accounts, according to court documents. However, 98 percent of that net income was paid to Wachovia, which left $58 million of the developers’ initial loan still due.
The development team included Sacchi, Bradley Hite and Michael McGuinness, each who received compensation of more than $210,000 between July 2005 and June 2007 for their services, legal filings show. In the court-approved bankruptcy plan, however, each of them will receive $72,600 over the next 18 months with incentive compensation capped at $2.1 million total.

Feel free to email or call us 813-784-7744 with any questions regarding The Towers of Channelside or any other condo developments.