Boating Communities in South Tampa get approval for Canal Dredging –Tampa Tribune -The original plan was to asses the residence a minimum of 8K, now the City of Tampa will move ahead with the project without taxing homeowners, with the help of federal funds.

TAMPA – A thick bed of foul-smelling muck blankets the bottom of a dozen canalsalong Old Tampa Bay, caused by decades of stormwater runoff and over development.

City officialsand residents have wrangled for years over whose responsibility it is to clean up the canals, many of them carved into the coastline by developers in the early 1960s after the West Shore area was annexed into the city from Hillsborough County.

At one point, Tampa planned to tax residents who live along the canals at least $8,000 per household to pay for a dredging project – a proposal that drew fierce opposition from West Shore property owners who argued that the city should foot the bill for the work.

Since then, though, city officials have scrapped those plans and decided to move ahead with the project without taxing homeowners, with the help of federal funds.

The city plans to submit the required paperwork and applicationsfor dredging permits to Hillsborough County’s Environmental Protection Commissionbefore the holiday break and is expected to put the project out to bid sometime next year, said Chuck Walter, director of the stormwater department, who will oversee the dredging project.

The new plan calls for dredging a 20-feet-wide by 3- to 5-feet-deep channel on a dozen canals in the West Shore area and a small portion of one canal on Davis Islands.

Funding for the dredging will come from a $1.3-million federal grant and $1 million in matching funds from the city. City officials have already spent about $600,000 of that money on engineering studies needed to apply for permits from county regulators. 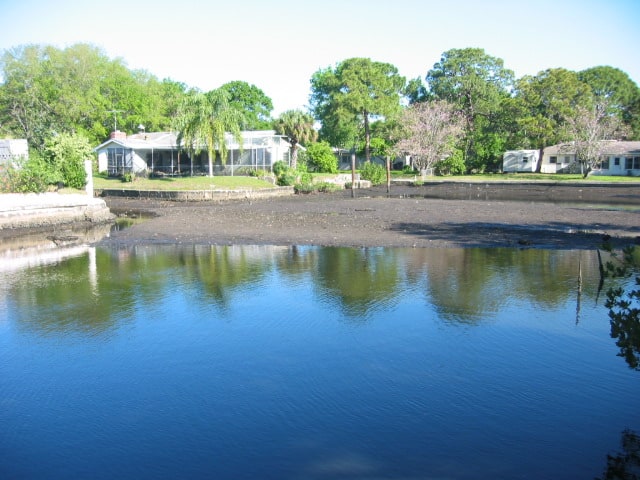 Walter said cost estimates for the project, previously estimated at more than $6 million, have been lowered and that the city has enough money to get the job done.

One reason for the lower cost is that city officials weren’t aware until recently that some of the canals are not in as bad of shape as preliminary surveys suggested.

Another is that the original project called for cleaning out more canals, including two on Davis Islands, and dredging them all down to a deeper level for navigational purposes.

“We’re trying to get this done the cheapest and most surgical way possible,” Walter said.

Residential development and stormwater runoff have contributed to the deterioration of the canals, many of which have never been cleaned out. Walter said removing the muck from the bottom will improve water quality in the canals by increasing the tidal flow.

The dredging will also benefit homeowners who live on the canals and benefit the city by increasing property values in one of Tampa’s most affluent neighborhoods, he said.

Marlin Anderson, president of the Sunset Park Homeowners Association, welcomed the news. He said homeowners have been waiting years for the project to get under way.

“If they can go ahead and dredge these canals, it would be great,” he said.

Councilman John Dingfelder, whose district encompasses the West Shore area, said he had a “mixed reaction,” considering how long the project has taken to get going.

“It’s long overdue,” he said. “But it’s unfortunate that we didn’t figure this out earlier. We spent a lot of time talking to people about the assessments. It was very divisive issue.”

Some homeowners got tired of waiting for the dredging project to get under way.

This year, a group of Beach Park Isles residents chipped in $45,000 to dredge a canal in their neighborhood. The project removed 12,000 cubic feet of muck and silt.

That canal has been taken off the list for the city’s project.
City officials still need to talk with about a dozen homeowners who have docks that need to be temporarily moved, so contractors can dredge a clear path down the canals.

Homeowners would have to pay for the cost of removing the docks, Walter said.

Sam Mirabella Jr. lives along one of the canalsand opposed the special tax assessment. He was one of many homeowners who argued that the city should pay for the work because stormwater runoff has contributed to silt clogging the canals.

Now that the city is paying for the project itself, he doesn’t have a dog in the fight.

If you are thinking of buying a waterfront home in S. Tampa or Davis Islands, now is a good time to take advantage of increased appreciation when the dredging project is complete.  Living on the water and the value of having a boat in your backyard is what motivates home buyers.

If you have any questions, or you are considering listing your home, please don’t hesitate to contact me.  Rae Anna Conforti, PA, Real Estate Agent 813 784 7744